I could not stay away from the list, especially since several of my acquaintances was competing too. It ended up consuming a lot of my free time (and some of the other time too) and it was actually something of a relief when it was over. It was mighty fun, though!

Anyway, I finally got into sixth place, which earned me a bike :) Yesterday ÅF held a small event for anyone on the list who wished to come. About 20-30 people showed up and we ate some pizza and played some poker (we had to watch some informational movies about ÅF too, but let’s not talk about that).

On this picture we can see Alexander Bottema, one of those aforementioned acquaintances, accept the diploma for first place. Congratulations, Alexander! 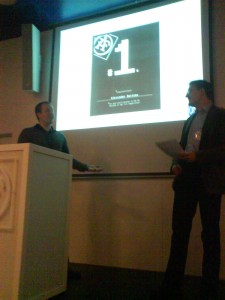 The start of the small poker tournament: